Also check to make sure that the folder for any specific mod contains only one .uplugin file.

A part of our changes from 4.21 to 4.24 changed the way we created the stored Body and Fixture data. Instead of using BodyEditor and A_Fixture blueprints, we introduced new C++ data types for storing the data.

Our previous pipeline of using Blueprints and changing their settings during simulating often crashed/broke the editor. The C++ Base Types are almost smaller and faster to load, as well as the editor being much happier about updating their properties during Simulation.

This Update and was meant to be a transitional phase. Where both methods worked and updating mods would automatically create the new C++ Data types without the mod author having to worry too much about it, then the next update removing support for the old Blueprint style of working.

Unfortunately this is not the case. Something has happened and has caused some of the previous Fixture and Body Blueprints made in the old SDK incompatible with the 4.24 SDK and they will not load and then cause errors during cooking.

Why this is the case, we have no idea. As there is no difference between the Fixtures and Bodies modders make vs the ones we make at Camshaft Software. The 'upgrade process' was the same, which was effectively nothing. We just moved to 4.24 and they worked.

None of this really matters to you, you just want to get your mod fixed:

Find the Preview, open it up: 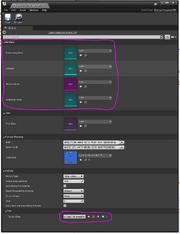 Hopefully they are named something useful. If not, they should be around 32kb in size.